Slowly, but surely, our efforts are paying off.

Each year, on a cold night in January, volunteers from throughout the DC Metro area explore every corner of our region to count the number of people experiencing homelessness on that night. The results of this year’s effort, the 2018 “Point-in-Time Count,” were just released and show a continued decrease in the number of persons experiencing homelessness. Overall, in the DC Metro region, 10,480 people were homeless on a single night in January, a decrease of 6% from the previous year. 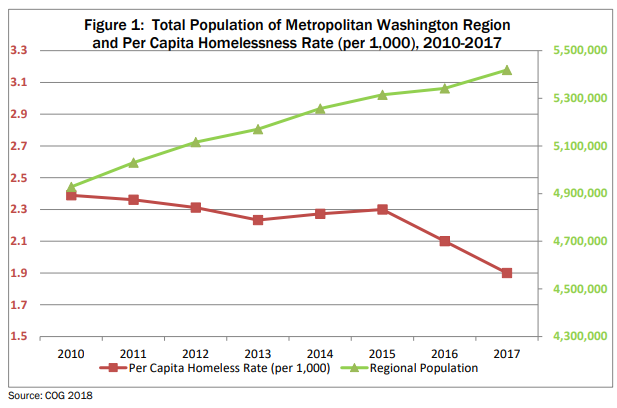 Good News! The Per Capita Homeless Rate Has Declined as the Overall Population Has Increased in the DC Metro Area.

Over the past four years, Arlington has seen a 32% decline in family homelessness and Alexandria a 5% decline, as measured by the Point-in-Time Count.

“We’re pleased that the Point-in-Time Count has shown a steady decline in the number of people experiencing homelessness over the past few years,” says Sam Kelly, Bridges’ executive director. “It’s a testament to the homeless services organizations in our region working tirelessly on a difficult issue. At the same time, it’s important to remember that this is a snapshot of homelessness on one night in January and not reflective of the total number of people experiencing homelessness over the entire year.”

Why is Bridges serving more people from year to year if homelessness in our region is declining?

After many years of providing transitional housing to people experiencing homelessness in the City of Alexandria and Arlington County, Bridges moved from transitional housing to a rapid re-housing model in 2015. This was driven by a new focus among federal agencies (the Department of Housing and Urban Development and the U.S. Interagency Council on Homelessness), which held that shelter stays should be shortened and that persons should be moved into permanent housing as quickly as possible and then be provided with support services tailored to meet their needs.

Last year, we served 109 people in our emergency shelter and 234 in our rapid re-housing program. The Point-in-Time Count does not record individuals in rapid re-housing, which is where we’ve seen the greatest increase in our numbers.

“As we integrated the rapid re-housing model into our programs over the past few years, we have increased the capacity to serve more families,” says Kelly. “Despite the decline in affordable housing in our region, we have, through our advocacy and rapport with area landlords, been able to rapidly re-house the families residing at Sullivan House, our emergency shelter.”

The full results of the Point-in-Time Count and analysis by the Metropolitan Washington Council of Governments may be seen here.